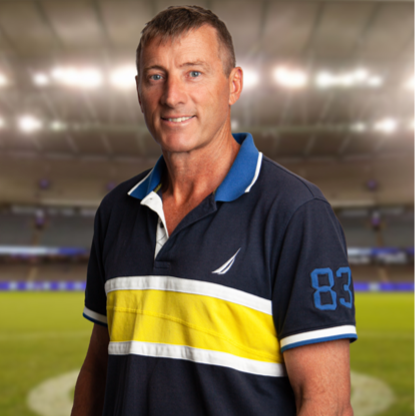 “I joined QM as a mind mentor as it gives me the chance to pay it forward.”

To many, Richard Osborne requires little introduction, especially if you’re at all familiar with the game of Australian Rules Football (AFL).

After debuting as a 17-year-old with Fitzroy, Richard played 283 VFL/AFL games from 1982 to 1998, winning numerous club goal kicking awards, captaining the Lions in 1991, and representing Victoria no less than 7 times in State of Origin matches.

Once his career concluded, Richard enjoyed some time in the media before taking on a coaching role which saw him lead VAFA side Monash Gryphons to a near perfect 15-1 season that delivered the club’s first senior premiership.

During both his sporting and post-football life, Richard has developed and maintained a keen interest in helping others, complimenting this drive to assist everyone he comes into contact with through studies in mental health, in particular NLP.

NLP provides practical ways in which people can change the way they think, view past events and develop a new approach to their everyday lives.

As part of the It’sLimitless team, Richard is committed to using his skills and extensive experiences in life and elite sport to help others be the best they can be.